Burj Al Arab : The only seven-star hotel in the world

There are essential things that a country must have. Each tourist destination countries must have landmarks that would forever bear in mind of those tourists who have visited it. It can be a natural or a man-made structure. There must also be hotels that are inexpensive as well as luxurious to fit the budget of all kinds of tourists. Five-star hotels are rampant. But is it possible to have a six-star hotel? Or better yet, a seven-star hotel? Actually, there is. It is the Burj Al Arab in Dubai which is considered as the only seven-star hotel and a first of its kind. 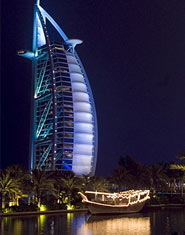 Burj Al Arab simply means Tower of the Arabs. It is a very luxurious hotel currently under the management of the Jumeirah,Group. Standing at 1,053 feet, Burj Al Arab, is the tallest building that is exclusively used as a hotel. It stands on a man-made island in the coast of Jumeirah Beach. The shape of Burj Al Arab imitates the sail of a boat, particularly a traditional Arabian vessel, which symbolizes the transformation of Dubai. With its unique architectural design, this hotel is considered as one of the emirates icons. That is why when people mention the name Dubai, it is now followed by picturing in their minds the image of the unique hotel.

There are many features of the hotel that makes it stand above the rest and distinctively Burj Al Arab. The hotel was inspired by the dhow sail having wings at each side. Spaces between the hotels wings are coated by a Teflon fiberglass. The sail part of the building is made from the material which they call Dyneon. As for the sails fabric, the coat is made out of DuPont Teflon. This is a material that would protect the building from the harsh heat brought about by the climate, dirt and wind. The DuPont Teflon is expected to last for fifty years before the fabricators will replace it with a new one. During daytime, Burj Al Arab is quietly standing at the coast of Dubai. But at night, the fabric of the sail, lights up in different colors creating a light show along with some water features. However, during a certain holiday, the said features of the hotel are turned off in respect to the mourning period for Sheikh Maktoum bin Rashid Al Maktoums death last January 2006. 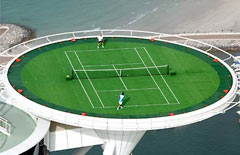 Another unique feature Burj Al Arab is the suspended helipad. Not only this part of the hotel is a helipad but can be a tennis court as well, overlooking the beaches and city of Dubai. Many popular figures in sports and in the music industry have been visiting the helipad of Burj Al Arab to play some fun games or to give exposure to the magnificent building. This includes Ronan Keating, Tiger Woods, Andre Agassi and Roger Federer. Ronan Keating shot a music video, Tiger Woods hit golf balls and letting it fly into the Persian Gulf, while the two prominent tennis players played a game (unranked) at the worlds tallest tennis court.

Surely, the price is also more than the usual rates of any luxurious hotels in the world. In order to have a night at Burj Al Arab, you must have a minimum budget of one thousand US dollars so that you can sleep at the cheapest available room in the hotel. It increases till fifteen thousand US dollars a night. If you wish to stay at the Royal Suite, then prepare a jaw-dropping amount of twenty-eight thousand US dollars just for a nights stay. There are also available restaurants inside the Burj Al Arab which caters mouth-watering local and international cuisines.