Dubai Palm Islands : The 8th wonder of the world

With all the reinventions and undergoing project constructions in Dubai, you will never wonder how this emirate will become one of the most successful places in the world. Actually, it already is. But unlike other countries that got stuck with their present civilization, Dubai keeps on developing and yearning for more. Not just for the sake of tourism but for the economic growth of the whole region in general. One example of this is a project that is truly one of a kind  the Dubai Palm Island. 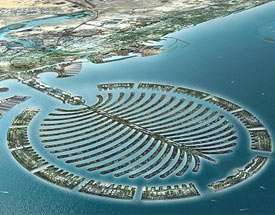 Dubai Palm Island is a man-made island project built on Dubais coast. It was only in May 2002 that the announcement of the said project was made. The Dubai Palm Island project was under the supervision of Al Nakheel Properties of the Nakheel Corporation. This will add at least 120 kilometers of shoreline in Dubai. There will be a lot of areas where residents, leisure parks, entertainment, and business establishments will be built. This project has created a huge positive publicity that put Dubai in the front pages of every international gazette and real estate magazines. Much more Dubais name has once again been recognized all over the world.

There had been a lot of man-made islands created before but the Dubai Palm Island is stunningly unique, not to mention, amazing. It has three islands namely the Palm Jumeirah, the Palm Jebel Ali, and lastly, the Palm Deira. The first island was inspired by the shape of the date palm tree. It has the trunk as well as the crown having seventeen fronds. The last two islands that shaped like a crescent, serves as the breakwater. The goal of the Dubai Palm Island is to be a new place where at least four thousand residential villas, numerous restaurants, health spas, dive sites, shopping malls, sixty luxury hotels, and five thousand shoreline apartments will be developed. With this, many people, especially the government of Dubai, expect that the emirate will still be a prime tourist destination all over the world. Since then, many have called the Dubai Palm Island as the 8th wonder of the world.

The three islands of the Dubai Palm Island have different purposes, according to the planned project of the Al Nakheel Properties and Dubais current crowned prince, H H Sheikh Mohammed bin Rashid Al Maktoum. The Palm Jumeirah is a home for residential properties where relaxation, living, and leisure are the main concerns. The Palm Jumeirah has shoreline apartments, different types of villa, and boutique hotels. On the other hand, the Palm Jebel Ali serves as the entertainment destination for the family. Both tourists and local residents can access the parks. Since the Palm Jebel Ali is twice bigger than the Palm Jumeirah six marinas, water theme parks, sea village, as well as water homes were built in this part of the island. As for the Palm Deira, which was last added upon the request of the crowned prince, there will be shopping malls, residential properties, clubs, sports facilities, and marinas. Out of all the islands in Dubai Palm Island, the Palm Jumeirah is the area which is closest to several main facilities such as hotels, supermarkets, ice café, and ski resort.

It was only november 30, 2006 that the Dubai Palm Island prepared for the first few residents. The whole Dubai Palm Island is expected to be thoroughly finished by the year 2010. By this time, Dubai had definitely thought of another project like a man-made island in cobra shape. This is actually possible since the emirate has already proved its capability in terms of building and developing properties.