The World Island in Dubai

The population of the emirate of Dubai is rapidly increasing year after year. Not just because of its locals but because of the expatriates, foreign tourists and workers who wished to stay or at least to invest. Sooner or later, the current apartments, residential areas, and hotels would not be enough for the rushing immigrants. Therefore, they created several residential buildings and the infamous man-made island, The Palms, in order to suffice all the real estate demands of the emirate. But after the success of the Palms, heres another real estate innovation that would surely put Dubai once again in the international news. Another man-made island in Dubai is yet to come. They call it Dubai the World Island. 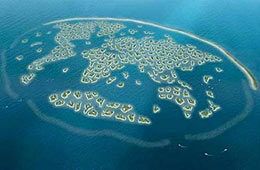 Dubai the World Island is a current real estate project managed by the same group that started working with the Palms project  the Al Nakheel Properties. The Palms gained a warm welcome, huge triumph, as well as international recognition. They are actually expecting the same for the Dubai the World Island. The said project is meant to cater the high end investors, buyers, and corporations. From the name itself, you will already have a picture of how the project would look like when it is already finished.

Unlike the Palms, Dubai the World Island is comprised of several islands inspired by the form of continents and countries as seen in the world map. There is an estimated three hundred islands to represent everything which is within the globe. There will be four breakwaters to protect it from the long waves of the Dubai coast. It was only in September 2003 when the crowned prince of Dubai, Sheikh Mohammed bin Rashid Al Maktoum, and the Defense Minister announced the vision for the project. Dubai the World Island is expected to be completed by 2008.

Each island in the Dubai the World Island project has different sizes ranging from six to twelve acres. This of course, depends on what country or continent on the map does it represent. You can visit one island to another by the use of aircrafts or boats. Unsurprisingly, different companies already began offering yachts, helicopters, and amphibious planes for the transportation of the residents of Dubai the World Island. The three hundred islands in this one of a kind project are divided into four categories. First on the list is the island for the very rich people where there can be build their fairytale-like dream home. There will also be luxury estates and private islands for real estate properties. Moreover, Dubai the World Island will have island for commercial establishments where restaurants, hotels, shopping malls and leisure attractions will be developed. It is located only few miles away from its sister man-made island, the Palms. 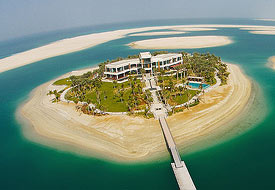 Even if the Dubai World Island is not yet completed, many famous celebrities have already made a major purchase in the project. This includes the popular Micheal Schumacher, the icon David Beckham and the legendary Rod Stewart. There are also some multinational corporations who already made purchases and now in the course of planning their own site to be developed. Moreover, private firms are now preparing to have housing projects in Dubai the World Island. Although many multinational companies are already thinking of investing recreational centers that would cater to the residents and tourists as well, these projects are just speculations not until the World Island is totally completed. But as of now the World Island project still excites interested buyers and investors while the Palms, on the other hand, is currently gearing towards the support of the tourism industry in Dubai.