The emirate of Dubai in UAE is not just a place where construction of hotels, shopping malls, real estate properties and other commercial establishments is rampant. Since Dubai gives so much importance to its local residents and its tourists coming from all over the world, it also develops several sites where they can enjoy, unwind, and simply relax, together with the whole family. Their interests also give inspiration to most developers and investors in turning properties into something fun-filled and people-oriented. Because of this Dubai has developed another astounding attraction that would overthrow the infamous Disney World, a project they call Dubailand. 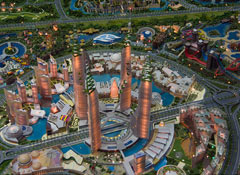 Dubailand is a park where locals and tourists could access. It the emirates counter to the internationally recognized theme park in California, USA and Japan  the Disney World. However, Dubailand will be two times bigger than the latter. Onece completed, it would not only cater a huge theme park but eco-tourism and retail establishments as well. Moreover, Dubailand will also have areas that will host several outdoor sports events such as golf and racing. Some of the projects included in the said part of Dubailand include Dubai Sports City, Golf City, F1 Theme Park, and the Dubai Autodrome. But on these mentioned projects, it is only the Dubai Autodrome that has been fully completed.

Dubailand is part of the local company called Tatweer, which works under the Dubai Holding. Tatweer is known as one of the most ambitious developers that dreams of having Dubai as a center for family tourism and is now currently putting it into action. The said grandiose project began in 2006 and is expected to be completely finished by the mid-year of 2020. As of now, there are only three attractions that are open to the public. Aside from the Dubai Autodrome, the Al Sahra Desert and the Global Village may now be visited by the whole family. 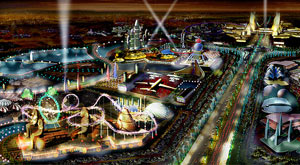 The budget allocated for the Dubailand is said to be within 235 to 300 billion AED. It embraces a total of three billion square feet. Because of its vast area, Dubailand will have at least forty-five mega projects including planetariums, spas, hotels, resorts, and of course, theme parks. Within the project alone, there will be more than fifty-five hotels to be built. Once the whole park is complete and will fully operate, the developers and investors are expecting a rush of more than forty thousand people visiting every day and more than fifteen million visitors each year.

Dubailand has already hosted some international events. The recent event held here was the concert of the Colombian artist, Shakira that drew a lot of fanatics, music enthusiasts, and spectators. It has also hosted the final round of the event called FIA GT Championship in october 2004.

Dubailand is the main highlight of the Dubailands Motorcity. It is a motor sports area with complete facilities. There is also the so-called Race and Driving School for those who are aspiring to be race car drivers. By now, the indoor kart track is about to finish.

As of now there are many properties for sale in Dubailand for businessmen who wanted to have a solid investment other than residential real estate properties in Dubai. This is a part of Dubais emirate reinvention and economic growth. Once the Dubailand is completed it is expected to be another major factor that would influence the tourism industry as well as the gross domestic profit of Dubai and the whole United Arab Emirates.