Water-related sports are very much encouraged in Dubai and in the whole United Arab Emirates as well. It is said that these water sport activities portrays part of their location, culture, and of course, their history. Along with tourism, these marine sports are very much thriving in United Arab Emirates. Some events are even sponsored by the biggest companies in the region. On the other hand, teams or participants are supported as well by these companies. Out of all the regions in UAE, Dubai has the most number of water sports enthusiasts particularly in powerboat racing. They even have a national that competes in powerboat racing called Victory.

It was only in the year 1992 that this powerboat racing team started to enter the event called World of Class 1 Powerboating. In the same year, the team got the first and the second place in the last two rounds during the championship of that event. Since then, Victory Team became one of the most popular and most successful teams in Dubais history of the powerboat racing. Victory Team has already won numerous competitions in powerboat racing such as the F1 and the Union International Motonautique Class 1 Championship. The wins of the Victory Team are not just recognized in United Arab Emirates but in the other parts of the world as well. This is another reason to put Dubai in the front page of sports magazines and be recognized on the map at the same time. This powerboat racing team has certainly escaped the underdog image way back in 1990s when it was still starting. As a matter of fact, in the recent WPPA World Powerboat Championship, the duo of Arif Al Zafeen and Jean Marc Sanchez clinched the 2007 WPPA European Championship by finishing first in the sixth round of the powerboat racing event with a total of 116 points after the sixth round out of eight. It was followed by H Al Thani and M Nicolini from Qatar. 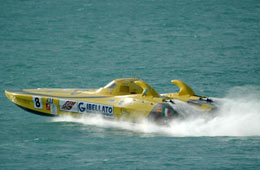 It is said that the sport of powerboat racing is for the elite. One of the many reasons is because the gears and equipments used in powerboat racing usually need a lot of money to keep it well maintained. Moreover, this event is more than just the action and excitement. It is also combined with the glamour, the glitz, and the allure that can be found in most international sport events. During November, Dubai becomes the host for the annual Union International Motonautique Class 1 Championship or the UIM. This is when almost 350,000 spectators from neighboring countries gather. For those who cant watch the said championship at Dubai, they can still catch up with the current status of the events since it is usually televised in European as well as Asian countries.

Powerboat racing, specifically the UIM, is a very hazardous sport. Because of this, both the throttle-person and the driver are carefully strapped inside the boat before the game starts. The size of the boat stretches up to 14 meters long and has a weight of more than five tons. The engines of the boats used for powerboat racing can are so powerful that it can speed the boat up to an amazing 160 miles per hour. The boat is definitely meant to compete in a very risky speed.

Aside from the UIM, another powerboat racing event happens at Dubai every December. It is hosted by the Dubai International Marine Club where they fight for the upcoming Dubai Grand Prix. Although it is just a local event, it is still one of the most prestigious competitions in Dubai.